When I first started racing a friend told me to go where the competition is. Simple advice really but as someone that likes to build it was definitely something I needed to hear. That is exactly what I did when I entered 944 spec with NASA Midsouth. A class with large fields at home as well in the Southeast and Great Lakes regions.

I’ve enjoyed several successful seasons in 944 spec and my skillset has grown immensely as a result. Although I will continue to support and race the pink #901, it is also time to expand my opportunities.

(I considered a lot of factors during this decision and may expand on that at a later date.)

I initially started this journey looking to enter spec 46 as both 944 spec and spec e30 are slowly feeding into it. However, after racing a car that is almost older than myself, availability is high on my list and I quickly found the manual transmission 330ci that spec 46 is based off surprisingly hard to come by. And due to the likelihood of having to start with an automatic car, I shifted my focus to spec MX-5. To summarize, at this point in my career I am focused on the pursuit of speed and not parts.

Immediately I found an abundance of quality donor cars for spec MX-5. It is a quickly growing spec class with nationwide racing and crossover potential with both NASA and the SCCA. And as I dug into the rule book it became apparent I was going this route.

Finding a donor was ridiculously easy using Facebook marketplace and craigslist. I’m gonna sound like a broken record about this but I immediately found several choice candidates very close to home.

The choice donor car for spec MX-5 is a six-speed chassis with limited slip. I settled on a red 2006 grand touring model properly equipped with 100k miles. I picked this one up for 7k which is on the high side for a donor but it was too nice to pass up and honestly probably too nice to convert. The only thing I compromised on with this chassis is the suspension. Ideally I would start with a completely unmodified car but this one had seen an autocross or two and the owner installed a Flyin’ Miata stage 1 kit that I am not too impressed with. Given that it could be 10 plus years old though, it most likely is well passed it’s service life and leaves the car feeling twitchy.

Starting with a car that has been very well maintained has been great. I’ve been able to enjoy it around town and I dare say I enjoy this car more than the Lotus on public roads. The extra creature comforts are nice but mainly I don’t feel like I have a target on my back in the MX-5.

Now to the baselines. Before touching or changing the car I documented the weight of the car fully loaded as well as compression testing the engine. Then I wanted to take the car somewhere I could explore it’s limit.

Weight with a full tank of gas is 2505lbs. Minimum race weight is 2500 lbs which means I need to remove a few hundred pounds from the car as the roll cage and my own weight will add a bit back. I like to set my racecars at minimum weight with 2 gallons in the tank to account for scale fluctuations, avoid any fuel starve issues and account for miscellaneous weight changes.

For consistency purposes, I will weigh the car on a full tank during the weight removal phase.

Just like the rest of the car the motor is healthy. Yielding a 210 psi average across all four cylinders with only a few psi variance. Since 180psi appears to be the rebuild zone on these motors, I will be able to do an ‘everything but’ approach to the build. Freshening up the motor and adding the spec cylinder head last. Allowing me to test the car in a progressive manner.

It’s been years since I’ve driven what is effectively a street car on the track and I immediately discovered I’m a pansy without a full safety complement. However, I was able to push through and give the car a thorough ‘testing’ of sorts during a local track day with NASA Midsouth.

Testing consisted of 4 sessions. Here is a summary:

Traction control (TC) was intentionally left on. It’s pretty easy to activate during street driving and I wanted to see what it would do on the track. It is aggressive and activates on any turn with tight transitions. Also, I quickly lost confidence in the brakes and pulled off the track after lap 2. I knew this would be an issue but didn’t think it would happen almost immediately.

Brake fluid and brakes were swapped with race fluid and a set of Hawk DTC 60’s. These aren’t the spec MX-5 pads but I have access to Hawk pads through 944 spec contingency programs. The MX-5 brakes quite different from the 944 and my initial impression is that the 60’s are probably too aggressive albeit fade proof. With the brakes in order session 2 was run with the TC off.

I started feeling the car out during this session and building pace. Soon discovering the limit is absurdly low with the aftermarket suspension and old tires. The chassis had a tendency to snap to the right. Nothing uncontrollable but the chassis did not have the planted feel I expect from an MX-5.

More of the same except I forgot to turn the TC off. Thought this was funny in the video. Nothing looks out of place but my ass could feel it. Trying to balance a car with the throttle and activating TC simply doesn’t work. I quickly turned it off on the straight and got back to driving.

I realized the ‘birds’ chirping every time I passed the wall section at turn 7 was actually the tires screaming in protest and not in fact birds.

Full lap for reference. This car isn’t going to go any faster in it’s current state.

Audio is pretty much useless due to the wind noise at speed. 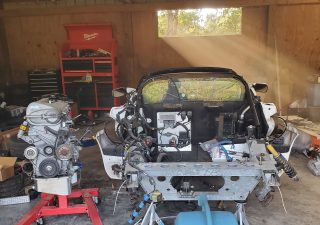